Double Podium for Bloomfield in Italy

Nemo Racing’s Darren Bloomfield produced an excellent performance at the recent self-styled Indoor Worlds held at the fantastic facility in Padova over the weekend to take podium finishes in both the nitro and electric classes.
The Nemo team had driven over ready for practice on Wednesday and Darren was straight away into the groove using the recent set-up tweaks to his Agama A215 to great effect and sporting the latest Beta Volante tyres.
As qualifying got underway, Darren came out swinging with a superb round one TQ to lay down the early marker, and would be competitive throughout the qualifying runs to take third place overall. The times were very close at the top as you would expect of such a high level event, and but for a few bobbles here and there the overall TQ could have been his…
There were excellent performances from the Nemo juniors Ollie Currie and Jonny Skidmore that saw them put in some excellent times in qualifying and give them a fighting chance to make the semis. 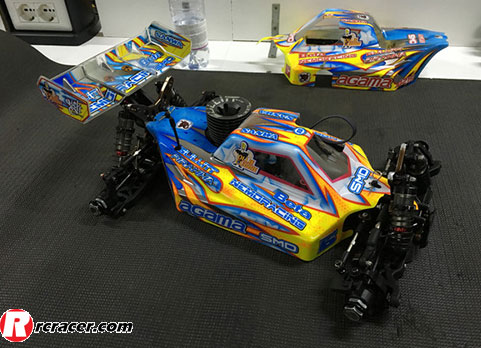 Finals
Ollie’s and Jonny’s quarters were very fast, but both of them were quick as well and were in the running to bump to the semis. Ultimately both came up a little sort, with Ollie missing the bump by only one place. That said, in the class of field present both had truly impressed as they continue their charge to the top.
In his semi final, Darren was battling for the lead when he had a ‘phantom run out of fuel’ situation. He was well short on runtime and it never happened subsequently, so we can only assume a small tumble caused the lid to pop open for a split second and drop a bit of fuel. He battled back to secure his place in the main final, and with a realistic chance to go for the podium.
Darren made a good start and was in the fight right from the off, challenging the top positions and easily able to run the same lap times as the leader. A cautious pit strategy after the semi final saw him make an extra stop to the others although in hindsight it wasn’t required. Still Darren drove excellently and but for the extra stop and a five-minute spell where he lost a bit of time, he would have been right there challenging for the win. Still he would finish an excellent third and on the podium.
In the electric class, Darren endured many electrical issues throughout qualifying and would have to start his semi at the back of the grid. We must say a massive thank you to Mr Killic and also Reds Racing, who both came to our aid and offered unquestioning support in helping a fellow racer get going. With the problems cured and a good run in the semi he was able to get himself up to fifth on the grid for the multi-leg finals. Some good results saw him go into the last leg with a chance of the win – something quite incredible considering the trials and tribulations he had experienced in this class. The final leg didn’t pan out for him, but again he would wind up in third place overall. Another excellent result and one he would have been over the moon with after qualifying.
So an excellent way to round off the season of 2015, being the only driver to podium both classes and now we look forward to 2016 where we will go and do it all again!