Schumacher Sign Up Delves Cragg and Yardy Start 2017 in Style

Some 44 racers made the trip for round two of the HNMC summer series with a few turning up and not racing as rain was forecast for the afternoon. Luckily the weather was good all day with a light shower at the start of the buggy A final only lasting two minutes! In qualifying Wayne Buckhorn took TQ in nitro buggy and Nigel Morris fastest in E-buggy.
In the D final Alan Dell won from Tom Shawe and Jack Richie, and then in the C final it was Paul Taylor winning from Aaron Knights and James Stevens. The B final win went to Dylan Saunders with Nigel Morris second and Aaron Knights third. The A final win went to Jim Thompson from Aaron Sayce and Wayne Buckhorn. 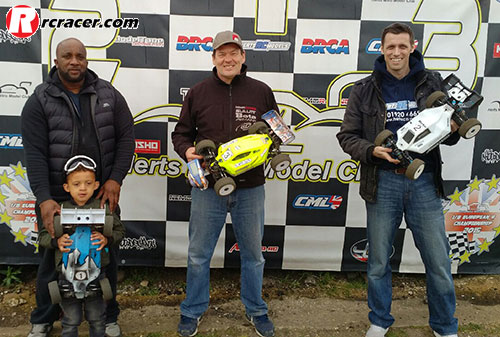 The E-Buggy win was taken by Martin Hart from Nigel Morris and Richard Cousins.