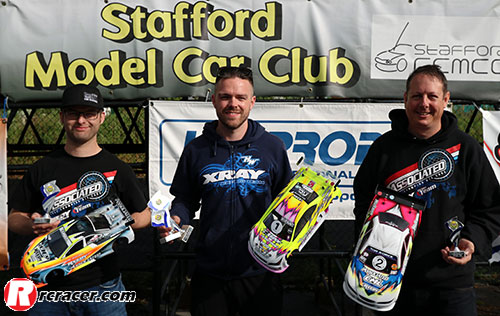 Stafford was a tough test for drivers in all three classes as rain fell intermittently during race day. After Saturday’s practise day was held in dry sunny conditions most drivers started race day with little experience of Stafford in the wet.
Always quick in the wet and slippery conditions, Olly Jefferies got to grips with the changing grip levels and took TQ in the modified class ahead of Chris Grainger, whilst Alex Gardener was third scoring his best qualifying at a UK national. In the 13.5T boosted the lower heats often had the best track conditions and making the most of this was Lisa Keen taking TQ ahead of James Hard with championship leader Zak Finlay third. Jimmy Maddison took TQ in 13.5T blinky.

Finals
Colin Jackson took the 13.5T blinky win from third on the grid with Richard King second and Jimmy Maddison third. Richard now leads the championship, but this class is far from settled…
A brilliant run from Daniel Blake saw a new national winner in the 13.5T boosted class and a great result for the young West Country driver. Second place for Zak Finlay did his championship ambitions no harm at all and James Hart netted third.
For Olly Jefferies three wins from three championship rounds sees the converted modified title go to the Xray driver. The championship win comes off the back of an impressive run of results that has seen Olly win every UK touring car race he has entered in 2017 and his goal will now be to win the remaining two rounds.
A good result for Zak Finlay at the next round at Halifax could see Xray add the 13.5T boosted title to the modified win. In the blinky class its very open, but a consistent Richard King looks the bookies favourite at the moment. The next round is Halifax and takes place in August.