How To Understand How Nitro Engines Work

The IC classes in RC have certainly made a big mark in the market place in recent times. The IC actually stands for Internal Combustion but for those that can’t get them set up, Infernal Combustion engine. Here is our guide on how they work and some interesting facts tooâ€¦ 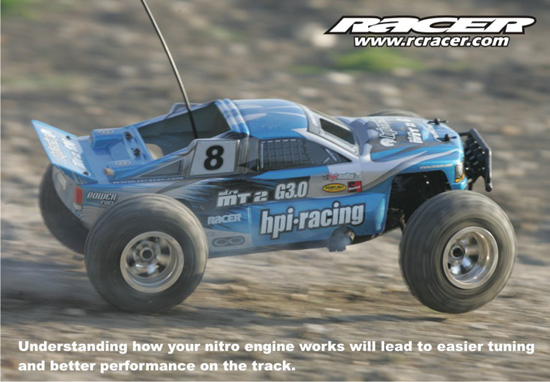 There are several types of IC engine and the type that is most commonly used in RC applications is the two-stroke type. All full size cars (with the exception of the Trabant) use the much heavier and more complicated four-stroke type engine. 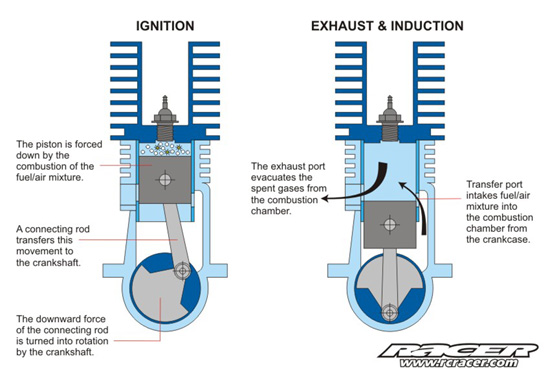 How Does It Work?

Okay we will start with the moment just after the fuel has exploded. The explosion drives the piston down, this is where the engines power comes from (the rest of the time it is just inertia keeping the engine spinning!). As the piston travel downward the crankshaft has rotated so that the slot to the carburettor is closed therefore the piston begins to compress the fuel air mixture that is in the crankcases. As the piston travels further down the cylinder the exhaust port is exposed and the exhaust gases start to clear out of the cylinder (see point about exhaust pipe). Next the intake ports begin to open and the fuel/air that is under pressure in the crankcases is pushed up through the transfer ports and starts to enter the cylinder. The intake gases help push the exhaust fumes out and additionally the exhaust will literally be sucking the fumes out. As the piston gets to the bottom of its stroke the crank will have rotated enough to open to the slot beneath the carb and more fuel and air mixture will start getting pulled through by the vacuum left by the mixture going into the cylinder. As the piston starts to travel up the cylinder the crankcase vacuum sucks more fresh fuel into the bottom end but also slows the transfer into the upper cylinder. The piston then slides over the intake ports covering them and begins to compress the new mixture. The final vestiges of exhaust gas leave the exhaust port unfortunately accompanied by a little of the fresh fuel/air mix (but the next part of the exhaust pipe pulse hopefully reduces this effect). The exhaust port fully closes and the new mixture is compressed into the cylinder head where eventually the temp rise due to the compression and the glow plug cause the fuel to ignite…. And the whole process begins again! 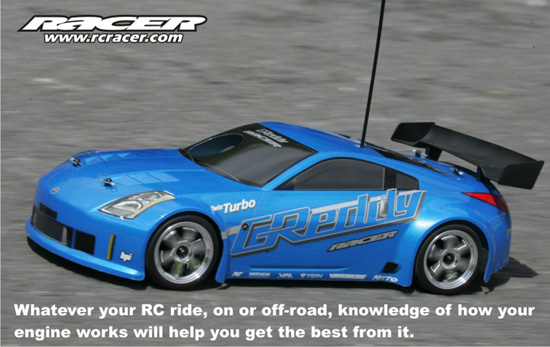 RC car engines typically run on Methanol, which is not petrol. Methanol is basically alcohol (but a very poisonous variety). Mixed into the fuel is an oil to lubricate both the crankshaft and the piston in the cylinder. The oil also acts to help cool the engine. Additionally the fuel can have Nitromethane mixed into it; this produces more power, is easier to set up but costs a lot more.

RC engines are compression ignition, like diesel engines. The engine does not have a spark plug to ignite the fuel at a specific time the fuel simply ignites when it has been crushed or compressed to a specific point. The actually ignition timing is therefore controlled by compression ratio and glow plug temperature. The glow plug acts as a catalyst to start the fuel burning and the hotter the glow plug (generally the lower the plug temperature number the hotter the plug will glow) the sooner the burn starts.

When mixing Nitromethane into the fuel the compression ratio needs to be reduced and often a cooler plug used. This is for several reasons. The Nitro makes the fuel burn easier so the burn will happen too soon if the compression is not reduced. The Nitro basically provides more oxygen so the Methanol can burn more completely which means that you can open the needle and allow more fuel into the engine. More fuel means more potential power, it also cools the engine but only just enough to make up for the extra power and bigger burn. Less compression actually means the engine will rev higher therefore effectively giving you a better spread of power (less compression normally means less power and punch but the Nitro has counteracted that). Also having less compression generally makes the carburation easier to set on any engine.

The exhaust pipe on a two-stroke engine is far more important than one on a four-stroke. The modern expansion chamber type pipe was invented by MZ’s motorcycle racing designer Walter Kaaden. The bike was raced successfully until it was stolen and the technology copied by the Japanese competition. The type used in RC cars are a development of that and are dual chamber pipes that are very similar to those used in Kart racing, giving a broader spread of power than a single chamber. 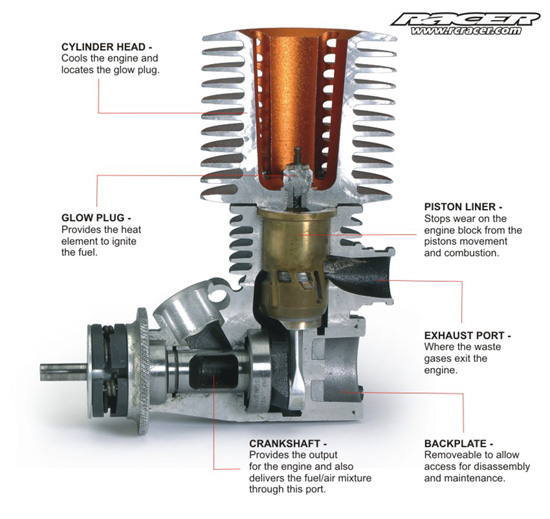 Most two-stroke engines use reed valves to act as a one-way valve so that the air enters through the carburettor and then when the piston starts to compress the fuel air mixture in the crankcases the reeds close and the fuel/air is forced into the cylinder. RC engines use the crankshaft as a valve and as the crank rotates it shuts the hole beneath the carb. This is similar to a disc valve motor, which uses holes/slots in a rotating disc to â€˜time’ the fuel. The most successful disc valves are the Rotax made ones, which form the basis of the Aprilia 125 and 250 GP bikes and a large number of Kart Racing engines. You will still often see that some air fuel mixture gets blown back through the carb due to the overlapping timing of the different parts of the engine cycle, this is known as blowback or overhang.

More ports generally means more area to get the fuel/air mixture into the cylinder, more fuel means more possible power (it can also mean more fuel stops). There are several pros and cons of more or less ports. Big ports don’t always work well as the gas speed through them is not high, when the fuel arrives in the cylinder there won’t be enough mixing and swirling or the fuel air mix and it also won’t push the exhaust gases out. Therefore a larger quantity of smaller ports can sometimes be an advantage. In a tiny .12 engine though you can end up with tiny ports because the webbing between them effectively takes up too much space. If you make the webs too thin they get too hot and can be the reason for seizures and unreliability. There is no real answer to this one as so many other factors also affect the engine, don’t forget though that reliability and good fuel consumption can make a world championship winning difference over 45 minutes. 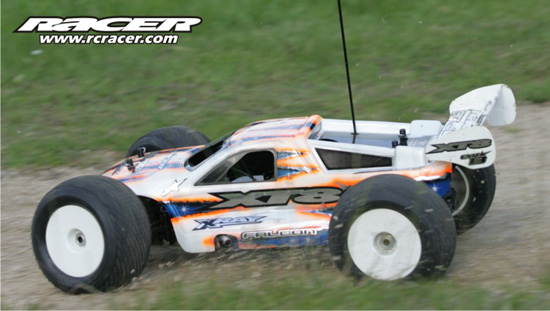 RC racers tend to think that two-strokes rev higher than four-strokes. In our sort of capacities they do because it is not possible to make a high enough quality four-stroke valve train small enough. As RC cars use and active method to control the air intake (the crank acts as a valve), unlike a reed valve two-stroke then the engine can rev higher. Four-strokes actively control the air intake and exhaust so they can force air to move faster. On a two-stroke you will end up loosing too much fuel out of the exhaust. Typical racing full size engines will rev to around 13,000 for a reed valve two-stroke, 14,200 for a disc valve, 15,000 for a kart disc valve, a 600 Supersport race bike 15,600 and an F1 car 19,000 (BMW seems to be the highest revver at the moment, the pistons have 10,000g on them at that RPM!)

The biggest negative is pollution. The reason that the two-stroke pollutes is that it tends to need to run a little rich, a four-stroke has about 4% unburnt fuel (Carbon monoxide percentage) and a two-stroke about 6.5%. Also some fresh fuel tends to get lost out of the exhaust port as the exhaust/intake exchange happens at the same time. The final problem is that you have to mix the oil with the fuel so the burnt oil also gets blown out of the exhaust into the atmosphere. There have been a lot of attempts to make the engines more environmentally friendly with â€˜active radical technology’ and direct fuel injection. Unfortunately it is always easier to make a four-stroke more efficient, two-strokes are beginning to disappear.

Given the same displacement (cubic centimetre/cc) a two-stroke engine will develop more power than a four-stroke but as we have seen in full-size motor cycle racing, the top class is now four-stroke engine only so in order to produce similar performance, the organisers have nearly doubled the size of the engines allowed. Two-stroke engines are very simple and are lighter compared to a four-stroke, developing more power at the same time. They have the ability to rev very highly, which really suits the RC hobby as many classes do not allow the use of multi speed transmissions. In situations when you can have a two or three-speed transmission, the performance of these engines can be electrifying. Inside a two-stroke engine there is only a few moving parts meaning that maintenance or trouble-shooting is often fairly easy.