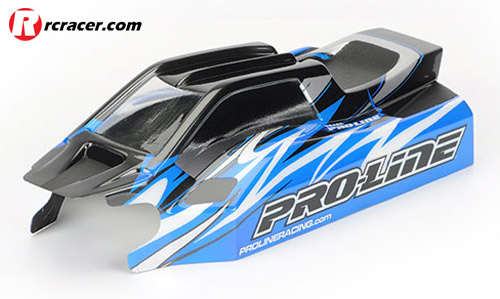 Pro-Line have wasted little time in developing a BullDog body to suit Team Associated’s new B44.2 Buggy. The new B44.2 features a longer and narrower chassis, which requires an all-new Pro-Line Bulldog body. Ryan Cavalieri is coming off an incredible season winning the 2012 ROAR National Championships in both 4WD and 2WD buggy running Pro-Line’s highly coveted line of BullDog bodies. Ryan has improved upon the design and developed the most advanced body yet with the 2012 BullDog body. Ryan took great care in refining the design for 2012 to create even more stability with enhanced steering to gain an advantage on the track. The windshield is steeper to create more downforce over the front wheels and the roof ridges have been raised to channel the airflow over the middle of the body for increased high-speed stability. The rear of the roof has been lowered and fins have been added to achieve stable airflow over the body. The fins also add rigidity to the body to increase aerodynamic efficiency.